A goodly number of Foothills Forum folks gathered for our second annual meeting Saturday at the only-in-Rappahannock County home of our super treasurer, Mary Frances leMat (and her husband, Chief Harold Beebout; thanks, MF and H!). The turnout was rewarding with many new faces. The spectacular view of the FT Valley below enhanced the upbeat mood. 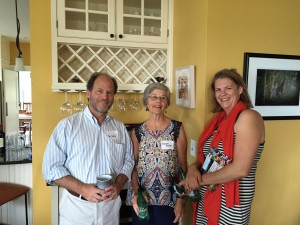 We enjoyed great food, a few libations and each other’s company. There was no other agenda than to pause and reflect on two years of the Foothills mission.

(We’ve crafted a short “annual report” you can find here on this website.)

I’d drafted an outline for some brief remarks Saturday. I’ll use it here to flesh out a sense of what’s transpired recently for Foothills Forum. 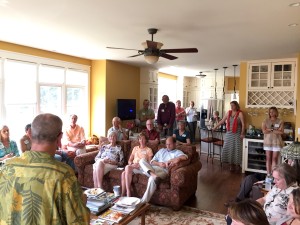 Besides thanking our hosts, I thanked everyone for their help in a year of productivity and progress, I thanked the tireless Lindsay Sonnett and Mary Frances’ knowledgeable helper Sarah.

I thanked our volunteers, our advisors, the directors and ex officio members. We tossed T-shirts to new directors Jan Makela and Sheila Gresinger. I singled out the members of the executive committee — Bev Jones, Mary Frances, Sheila, and Stephen Brooks — for their diligence and sustained commitment.

I thanked our members. I thanked donors who contributed $10,300+ during Give Local Piedmont. I thanked our sustaining donors giving significant sums over three years, and I gave a special shout-out to returning major donors in the county who are back because they believe in what we’re doing.

I went on to say:

We used this year to focus on what’s most important: The Rappahannock community. We’ve sharpened our Foothills mission/description: Community-supported research and reporting on Rappahannock. (Seven words, including the short ones).

Several recent activities speak to our commitment to community.

We netted a generous 42 percent response from the 3,000+ households that received and completed the Foothills Forum Survey back in October. (We thanked Bette Mahoney for her work on the Survey Committee and tossed her a T-shirt; I saw her wearing the very next evening!).

With the survey serving as a baseline of countywide opinion on issues, quality of life and services, we took the first big step this spring with Rappahannock Media. Foothills researcher/reporter Chris Connell produced a sweeping three-part series on the survey findings in April. That reporting was greatly enhanced by eye-catching graphics and design by Rapp Media’s Dennis Brack and experienced graphic artist Laura Stanton. This past month, the News published another three-part series diligently researched and reported by Rapp’s own Randy Rieland looking in depth at factors playing into the survey’s top two issues — broadband internet and cellphone service. You can find both series at www.rappnews.com.

We held a packed-house Q&A session featuring Randy at Tula’s cohosted by The Rapp News on those topics. As an indication of Foothills’ impact, the Board of Supervisors on Sept. 7 intends to discuss creation of a countywide broadband committee. (If you know someone who’d be great on such an important committee, contact your supervisor).

We also cited the terrific work of summer intern Julia Fair and noted our support for Kaitlyn Struckman’s videotaping efforts at the Rappahannock Record. We thanked Andy Alexander for his journalism guidance (including bringing Julia to Rapp).

We teased folks with  ideas in the pipeline for future reporting projects and forums.

I said we’d spent time this past year getting a solid foundation in place — dull but important items like insurance, pro bono (thanks Jay) and discounted legal support (thanks Mike), and nonprofit status established in Virginia.

We cited ways in which our means of communicating have changed here and elsewhere. Examples: Rapp News used Facebook Live so folks could view the broadband forum. We referenced the 271 and growing Likes for Foothills on Facebook (and urge you to hit Like).

We reminded folks of the cosponsored RAAC and FF screening of the Oscar-winning film “Spotlight” at The Theatre at Washington on Friday, Oct. 7.

We laughed, some of us shed tears of gratitude, and we raised a toast to a year of some achievement. 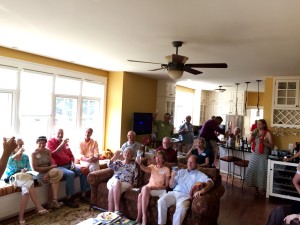 All in all, the annual meeting offered a welcome chance to reflect on good work by good people.